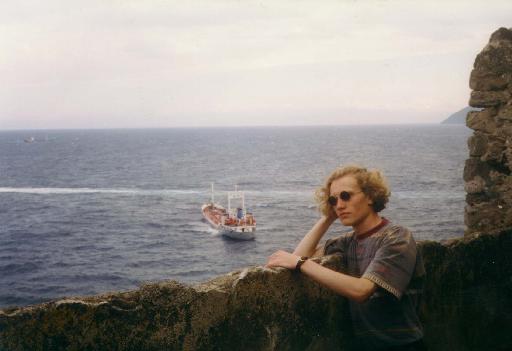 Note that my name can be written as Sergei, Sergey, Sergej, Serguei (in French etc. not to make "g" to sound like [dzh]). I have badges from different conferences with all variants. :)

Born december 7-8 1971 in Moscow. At first, nearly 8 years of my life I did nearly nothing. Then again for nearly 8 years I studied at the Moscow school N15 (now N1272), so I know English a little bit. However, later betrayed English to enjoy math in another school. Finally, in 1989 I graduated from the school N548 (later I returned there to teach astronomy and physics: 1993-2002).

In 1995 I have graduated from the Moscow State University, but didn't leave it completely. In early 1998 I got my PhD there (slightly ahead the standard schedule).

Since 1998 I work in the Sternberg Astronomical Institute at the division of Relativistic astrophysics. My main scientific interests include binary and isolated compact objects.

In 1993 I wrote my first scientific paper. At the same time I started to write papers popularizing science for different russian journals and web-projects. I was collaborating with the Stargazer magazine, and with many web sites (Astronet, Scientific.Ru, Pereplet). Now I mainly work (as a journalist and as an editor) for "Troitsky variant - Nauka" My main popular science projects on the Web - reviews of astro-ph and Scientific Astronomy Picture of the Day - are in Russian.

I have a blog in the LiveJournal (of course, in Russian).

In 2002-2004 I enjoyed a postdoc position at the University of Padova. Now I am back in Moscow.

Reading lectures on astrophyysics of neutron stars and black holes.

In 2011 I got so-called "Doctor of science" degree (the second degree in Russia, more or less similar to habilitaion). At the fall of 2011 I again worked at the University of Padova as a visiting scientist.